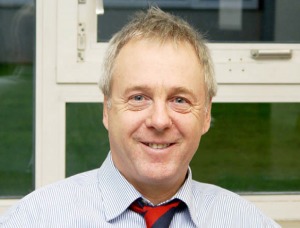 He began his undergraduate career as a pharmacist and in 1982, where he joined as Research Assistant and then as Assistant Professor at the Laboratory of Cell Biology and Histology of the Vrije Universiteit Brussels (V.U.B.) directed by Prof. Eddie Wisse. From 2002 he was Full Professor of Cell Biology in the same University. Albert Geerts provided key contributions in the field of hepatic fibrogenesis, and particularly on the biology of hepatic stellate cells.

As a strong supporter of high-quality basic science being adequately represented at EASL meetings, Albert Geerts was part of the EASL Scientific Committee for several years. In 2005 he joined the editorial team of the Journal of Hepatology as a world leading expert in cell biology and fibrosis. During his tenure as Associate Editor he strongly advocated that the journal was used as a forum for all subspecialties in Hepatology.

Apart from his eminent work on stellate cells and fibrosis, Albert Geerts was also an outstanding mentor and tutor. He loved teaching and was able to share his enthusiasm for cell biology with generations of students who entered his classroom. Albert Geerts trained several generations of young scientists and several have gained a solid scientific reputation. He made sure that his team knew that, besides a strong scientific background, it is also important to present at national and international conferences in order to share the knowledge.

These valued contributions in the field of Regenerative Hepatology and Liver Cell Biology fit perfectly with the naming of this consortium’s fellowship, which aims to progress the field through sharing knowledge (this naming was approved unanimously by all the members of the Steering Committee of the Consortium).